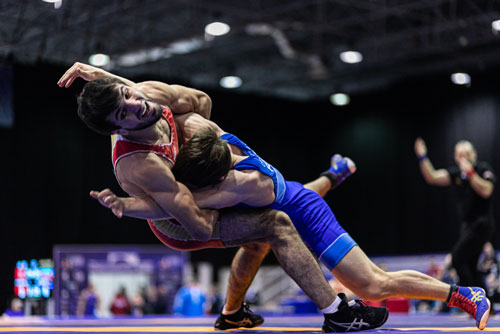 Shoulder injuries are one of the most common injuries in wrestling. Popular moves like head-levers, armbars and hammerlocks place immense pressure on the shoulder joint. It’s not uncommon for wrestlers to experience rotator cuff or ligament tears as a result.

Bursitis is the inflammation of the prepatellar bursa located above the kneecap. Wrestlers’ knees are constantly bouncing off the mat both offensively and defensively. This injury can be caused by a single hard impact, or as an overuse injury. If the bursa bursts, draining may be necessary. Otherwise, resting the area is the best solution.

Knee ligaments are frequently sprained, strained, or even torn throughout the season. Leg rides, takedowns, and pretty much any position—top, bottom, or neutral—utilize your knees and place an athlete in vulnerable positions. Strains and sprains require rest and potentially physical therapy, while tears will require surgery.

Wrestling is an exhausting sport, to the point where it’s considered a sport that requires some of the best cardiovascular conditioning. This, coupled with weight cutting, can hinder an athlete’s ability to recover, leading to overtraining and overuse injuries like bursitis and tendonitis.

Wrestlers are constantly using their hands throughout practice and in every match. One of the more brittle areas of the body, fingers are susceptible to jamming and breaking, especially when rolling and slamming on the mat.

Certain moves and slams to the mat can lead to potential breaks and dislocations. While not terribly common but not too uncommon, wrestlers can experience dislocations of a shoulder, kneecap, elbows, fingers or toes. But it’s not uncommon for wrestlers to make it throughout an entire career without a dislocation injury

Sprains and strains are caused by minor tears or stretching. Note, this does not mean stretching as in warm-ups, but when an area is suddenly stretched further than it is intended.

Specifically knees, ankles and shoulders fall victim to these injuries. These injuries will only last a few weeks and the athletes are back to 100 percent, but some sprains and strains can linger throughout the season.

While bloody noses are frequent in wrestling matches, the occasional break does occur. Cross-faces and other face wrenching moves can be quite painful and can cause damage with enough force. It’s not uncommon for wrestlers to have cuts and scratches on their face throughout the season, accompanied by a sore nose from time-to-time.

Every wrestler and wrestling parent knows about this one. While the symptoms are not physically threatening to an individual, a cauliflower ear isn’t exactly aesthetically pleasing.

Cauliflower ear occurs from a hit or repeated hit to the ear. These hits can damage the cartilage and cause bruising and blood clotting under the ear. When left untreated, the clotting restricts oxygen-transporting blood to the ear’s cartilage, eventually killing the cartilage in the ear and leaving the ear permanently altered.

The best way to prevent cauliflower ear is to wear the appropriate headgear, even during practice. An athlete might find it uncomfortable, but at least they will be used to it during competition. If an ear becomes damaged, blood must be drained to prevent permanent damage.

It’s important to note that while tears and other significant injuries can likely take an athlete out for the rest of the season, the recovery outlook is still positive. For instance, Nebraska’s own Jordan Burroughs tore his ACL his in college, but came back from surgery and won his second DI NCAA National Championship. Today, he has 6 world medals, 4 of which are championships, and a 2012 Olympic gold medal with a 34-4 record.