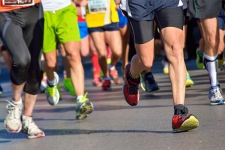 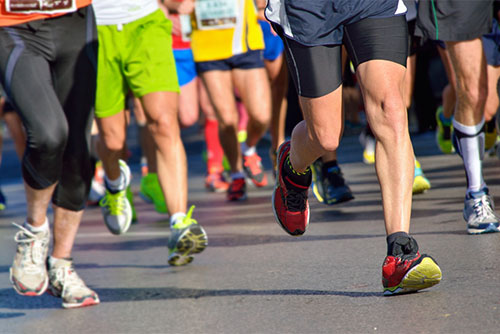 Heel striking – being a heavy heel striker is common in those with a slower running cadence because of the simple fact that their body mechanics are not allowing them to perform at their maximum potential because, when you’re striking with your heels it tends to mean your hips are behind your feet, so to speak. Not sure what we’re referring to? Well, think of is this way – your hips HAVE to be over your feet to propel you forward (which is the point of running, right?) but, if your feet are in front of your hips you won’t ever be able to effectively propel yourself forward. This heel striking issue is one of the reasons behind the barefoot/minimalist running movements. One huge advantage of running barefoot (or as close to it as possible) is that heel striking becomes much less of an issue simply because it hurts.

Now, if you’re not so keen on running sans shoes, we totally understand. However, if heel striking is an issue for you, try running for short periods of time (30 seconds or so) on carpet or turf with no shoes on, and then gradually work your way up from 30 seconds to a minute or two…this will allow your body to find it’s natural stride. Once you’ve gotten that figured out, feel free to put those shoes back on and hit the pavement…just not so much with your heel!

So, let’s take a moment to shift the focus away from your feet and onto your upper body. Believe it or not, one of the most trying things to teach a runner – be it as a newbie or a seasoned veteran – is how to run both fast AND relaxed. Not exactly sure what we’re talking about? Well, think about some of the most amazing runners that you’ve seen…what do they all have in common? They’re relaxed. Their shoulders aren’t tensed up and their jaw isn’t clenched. They’re intense, for sure, but they’re also a fast, fluid machine.

There are some things you can do to help ensure that your upper body is relaxed is to carry your arms properly. This means keeping the angle of your elbows at 90 degrees, even in your backswing – releasing the angle means you have to reform the angle which, in turn, means you have to expend extra energy in the process. If you’re a distance runner, make a conscious effort to raise your shoulders WAY UP at each mile marker during your run/race and then drop them back down into their natural, relaxed position.

Well, that’s it for part 2! In part 3 of our Running Done Right series, we’ll explore problems centered on lack of mobility as well as lack of speed.