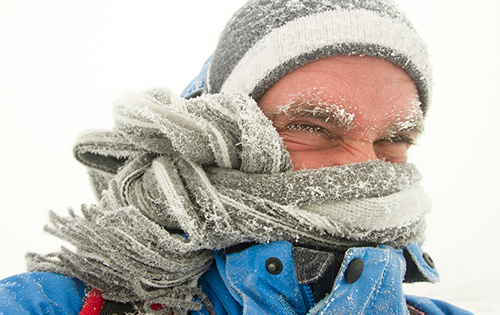 Frostbite is an injury that’s caused when the skin and the tissues beneath it freeze. It’s most commonly seen on the fingers, toes, ears, nose, cheeks, and chin – however, ANY exposed skin in cold, windy weather is vulnerable. Frostbite can also occur to skin that’s covered by gloves or other clothing. The most common cause of frostbite is exposure to cold-weather conditions, but can also be caused by direct contact with very cold liquids, freezing metals, and ice.

What are the stages of frostbite?

Frostnip – Frostnip is the first stage of frostbite and, fortunately, doesn’t cause permanent skin damage. During this stage skin will turn either pale or red and will feel extremely cold. Prolonged exposure leads to a “pins and needles” sensation as well as numbness in the area. Pain may occur as the area is warmed back up.

What are the complications of frostbite?

Complications of frostbite can range from relatively mild – such as increased sensitivity to cold – to extremely severe, which would include nerve damage, growth defects, infection, tetanus, and gangrene. Gangrene is the death and decay of tissue(s) and is a result of a lack of blood flow to the affected area. Gangrene can cause death and is often treated via amputation.

When to see a doctor

If you experience any signs of either superficial or severe frostbite (pale or white skin, numbness, blisters), you need to see a doctor as soon as possible. Pain and swelling, blackening of skin, and signs of hypothermia (a condition where your body loses heat faster than it can be produced, often a byproduct of exposure to extreme cold) are not to be ignored and should be treated emergently (which means get to an ER or call 9-1-1 ASAP).

Frostbite (and hypothermia) are both extremely serious conditions and should be treated as such. Do everything that you can to protect yourself, including not staying out in the cold for too long (frostbite can occur in less than 30 minutes in certain circumstances). Also, make sure that you’re dressed appropriately for the conditions at hand and don’t stay outside in wet clothing.

In short, stay safe. Winter can be a fun, festive time of year. But it can also be dangerous if we’re not careful!