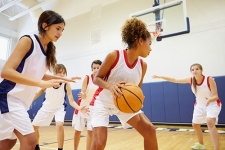 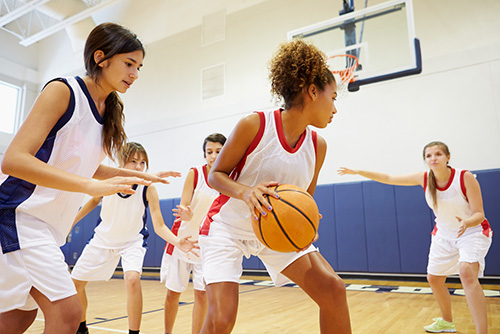 Achilles Tendonitis: Tendonitis is always an overuse injury. The achilles is the biggest tendon in the body, but it can still become overused. Patients will often feel pain the middle or bottom portion of the tendon near the heel. Fibers throughout the tendons become damaged and begin to break down, so it is essential that athletes rest an overused achilles to avoid rupture.

Sever’s Disease: Growing children are especially susceptible to Sever’s disease. The pain point caused by the overuse injury occurs where the achilles and the growth plate attach. High-impact activities can cause inflammation in this area of the heel, leading to pain and discomfort.

Sprains and strains: just like with ankles, the many ligaments and tendons in the knee can strain and sprain. The best solution to these strains and sprains is resting until healed, or at least comfortable to play. Physical therapy is sometimes needed for more severe or persistent pain.

Meniscal and Ligament tears: ACL tears are the most common, but PCL, MCL, LCL and the menisci are all susceptible to tears, too. In basketball, players move laterally, jump stop, stop abruptly and can land awkwardly, all of which can lead to a ligament tear in the knee. Unfortunately, these tears will likely lead to a season-ending surgery, but the surgeries to repair them are usually quite successful.

Finger and hand injuries are sort of overlooked in basketball since only one player can possess the ball at any given a time; but, since all players are constantly running and jumping, hand injuries – due to falls, impact with other players or the ball – are quite common. Houston Rockets Point Guard and future NBA Hall of Famer, Chris Paul – who’s racked up over 2,000 steals in his 14-year NBA career – has had six hand injuries in his NBA career alone, and those are only the ones the media knows about. He even has 16 pins and metal plated embedded in the palm of his shooting hand. Much of these injuries were caused by scrambles, awkward falls, and the sheer impact of the basketball hitting his hand(s) awkwardly.

Jams: These occur from forced motion to the PIP joint of the finger, which is the joint closest to your hand. It’s essentially a strain, aggravating the ligaments of the finger, and rest is typically the best treatment option.

Dislocation: Finger dislocations occur when a blunt impact or forced motion knock a finger joint out of its normal position. Most finger dislocations can be popped back into place immediately, but it will take at least a few weeks to fully heal. The injury looks worse than it actually is, but sometimes can lead to surgery due to a compound dislocation (where the bone ruptures the skin) or when nerve and ligament damage occurs.

Fractures: Bones in the hands and fingers are small and brittle, but a finger fracture is no minor injury. Fingers are fixated in a precise position for specialized functions, meaning that a finger fracture can hinder your entire hand along with the activities associated, such as typing. There are non-surgical and surgical treatments options, but this injury will take a player out for a large chunk of the season.